Will I Get Sued For Taking My Bike Back?

With the attention came a flood of supportive tweets and Facebook comments. Also with the attention came the offer of a Kitsap deputy sheriff to dig into the case for me. After some digging he got in touch with the guy I took the bike from, David. He learned that David bought the bike from Justin who bought it from a pawn shop. He explained to David that I was within the law to retrieve my bike. However, he indicated that David, distraught about the theft of what he thought was his bike, had called 911 and filed a case against me. That case will likely go nowhere, which explains why I’m hearing that David is trying to put together a civil suit against me.

The next twist in the story is that David’s boss, Garry, posted to the Seattle Bike Blog:

Weird the individual works for me and after this incident, I have seen reciepts for his purchase and the purchase of the upgrades. It is nice to have a blog that does zero fact checks on anything posted.

My response is that I’d love to see the receipts.

In the mid-2000s the Ellsworth Moment was sold as a frame only bike. Meaning that you had to buy both the frame and all the components and then either assemble it yourself, or have it assembled. I bought the 2005 medium sized frame from Gords in Winnipeg, Manitoba, where I grew up. A Gord’s decal is still on the bike. As is the Gord’s embossed stem cap. I then ordered a ton of parts from Jenson USA and Price Point. Once I had everything together I had the bike assembled by Velo Bike Shop. After assembling the bike I blogged about how much I liked it.

Don’t believe me? Here’s what I put on the bike and where it came from:

Here’s some of the receipts: 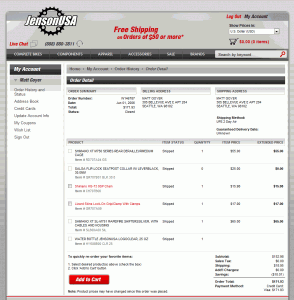 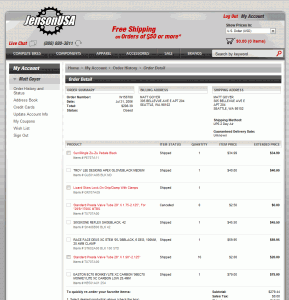 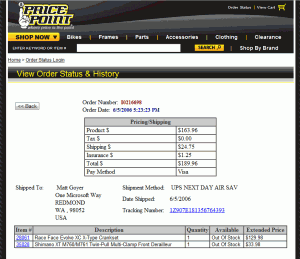 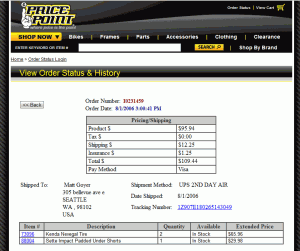 And if that doesn’t convince you here’s a photo of me on the bike at Whistler:

This wasn’t some generic Trek mountain bike sold by the tens of thousands. This was a custom built mountain bike that truly was one of a kind. The chance that David happened to put together the same bike is zero.

16 Responses to Will I Get Sued For Taking My Bike Back?