I was devastated to come downstairs this summer (end of July) to find that I was missing not just one, but two bikes, worth about $10k, from our condo’s garage! I think I was too hungover from the Capitol Hill Block Party for the theft to really register but after breakfast I got online and tried to figure out what to do next… I reported it to the police, logged it in the Stolen Bicycle Registry (but I never recorded the serial numbers!), emailed our condo management to see if the cameras had captured it (oddly they didn’t), bookmarked searches for them on Craiggers which searches all the different craigslists across the country (Ellsworth Moment & Commencal), I then called a bunch of bike shops, no one had seen them. And now months later they’re still missing.

I know I was a dumbass for leaving my bikes in my condo garage, even though it is secure, has video cameras, and they were locked (I watched a documentary on bike theft in the UK and now will never trust any lock again). I normally keep my bikes in my condo or in my storage locker, but (this is another blog post) we had a bit of a flood in our condo and had cleared everything out of the hall… And yes, I should have had the serial numbers. I have the one for my other bike written down. Excuses, excuses.

Now, to the fuckers who stole my bikes…

2009 Commencal Supreme DH – Medium: Be careful! I broke the frame on this bad boy when I cranked the seat post up to high racing Joe after a day at Whistler. Hopefully you’re not a fat ass, you wouldn’t want the frame exploding after you take a big drop. Now I did put a super duper big seat clamp on there to mitigate the cracks in the seat post tube, but you never know… But the rest of the bike is in good shape. It has a brand new FOX Van RC rear shock. I didn’t get the fork serviced though. It still had about 5 more days to go before servicing, FYI. The bike is also sporting a E13LG1 chainguard, the OEM one sucked. The best thing about this bike was the price. I scored it for half price on Chainlove. Sadly, haven’t seen any comparable deals since. 2006 Ellsworth Moment – Medium: Enjoy! The bike frame came from Gords in Winnipeg and then custom built down here in Seattle. The bike was freshly tuned, ridden only once or twice after the tuning and features a borrowed Racing Ralph tire ’cause I was looking for more rear traction and my shop was kind enough to let me try-it-before-buying it (could you please return it to Big Tree Bikes if you don’t like it?). Caution that the stem is a little long, I was going to swap it out, but maybe you have longer arms than me. Now maybe you’re smarter than me, but the FOX DHX 5.0 rear shock drove me bonkers. Way too adjustments. Good luck figuring it out, I’m not going to miss it! 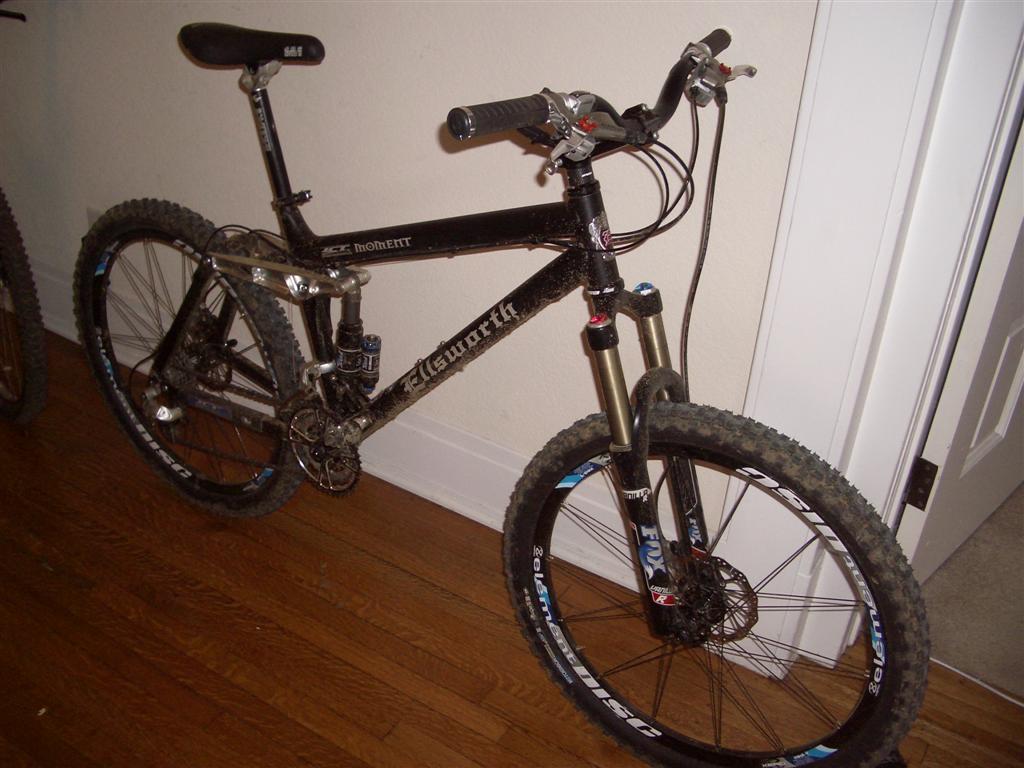 Internet readers, if you ever see either of these bikes drop me a line at matt@mattgoyer.com. I’d love to get em back! My friends are worried I’m too lazy to buy new ones.