How I Recovered My Stolen Bike a Year Later

Almost exactly a year go my mountain and downhill bikes were stolen. I was devastated! But remarkably just this past weekend I recovered one of my bikes all by myself. Here’s how it went down.

June 30th around midnight I was surfing Craigslist looking for replacement bikes when I typed in Ellsworth and up comes an ad for my bike! 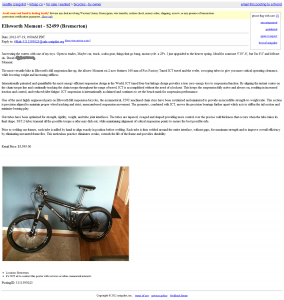 How could I be sure it was my bike? Easy, before my bike was stolen I had swapped the rear Kenda tire for a Racing Ralph loaned to me by Big Tree Bikes. Plus those XSD wheels from Gords are super unique. You can’t buy them in the US. And that seat? The SDG saddle came off my Rocky Mountain Blizzard.

It is midnight on a Saturday and I wanted my goddamn bike back so I called the police. They told me to call back during the week. Monday to Friday. 9-5. So frustrating!!! Being an impatient person, I pinged the Facebook and the advice rolled in.

That Monday I figured I should get the police involved so I talked to the Seattle Police Department (SPD). They advised me to arrange a meetup and then call them 30 minutes ahead of time and they’d assist in getting my bike back. Unfortunately, my bike was in Bremerton, an hour ferry ride west of Seattle. So I dragged my feet hoping my bike would magically make its way to Seattle. It didn’t.

Once my schedule got less crazy I called the Bremerton police. They basically said the same thing but that since I had filed a police report in Seattle that I really should involve the Seattle police. So I called the Seattle police back who confirmed that “they don’t do appointments” and that I should call them 15 to 30 minutes before the meet, ideally during the morning and ideally on a Sunday morning. That’s when they’re the least busy. Sounded easy enough.

But wait. They also wanted to know if I had my serial number which I didn’t. My friends suggested they head over to get the serial number for me on a test drive. I didn’t want to hassle them with two hours of riding ferries so I assembled all the info I could to document my bike ownership. Fortunately I had a picture of me on the bike at Whistler (I actually have shockingly few photos of me with the bike), a few blog posts about it, and while I couldn’t find the emails documenting my purchasing of the frame I was able to log into the sites I had bought all the parts from. I assembled a little dossier and called it good.

Next step was to arrange a meet. I created a fake email (matt_ski_mtnr) and emailed the seller.

Me: Hi David, Is your Ellsworth still for sale? When would be a good time to see it? I assume you never come to Seattle? :) Thanks! Matt

David: Sometimes I come to Seattle. Yes it is still for sale. I might be able to ride it over on the ferry. Unless you wanted to come take a look at it? In that case I could meet you at the ferry. Any time is good for me in the evenings.

Me: Cool. I don’t get to Bremerton much :). Would there be a good time to meet you at the Seattle ferry dock sometime soonish?

David: I guess I could ride it over Sunday. Late morning

David: Yeah I just need to look at the Ferry schedule. Would you rather have the platform pedals or SPD clip-less.

David: I will be taking the 945 ferry so I should be there around 1045. If you like it please bring cash. I would be a little nervious with giving the bike up with a check.

Me: Sounds good. I’m driving so can we meet at the parking lot at 1st and Columbia? My number is…

Sure enough he texts me in the morning that he didn’t make the ferry. I head out for breakfast assuming this is all going to fall apart. However, when in line at Starbucks I get a text that he is on the 11:10 ferry. Sweet!

I race home and Chels and I hop in the car and head down to Western and Columbia. We’re about forty minutes early so I call the SPD who says they’ll dispatch a car to help me out. With about 20 minutes to go Chelsea heads over to the ferry terminal to let me know when the ferry arrives and to ID the guy. I call the police again who say that they’re busy and haven’t sent anyone! The guy then starts texting me saying he’s close to meeting up. I start to stall him saying I’m getting in my car and heading over.

Chelsea spots the ferry, then the guy. Still no sign of the police. I call again only to find out that they’re still busy and haven’t dispatched anyone. So much for Sunday mornings being their quiet time! I drag my feet a little more then head over to 1st and Columbia on foot to meet him.

I meet the guy who is 6’4″ according to his ad for the bike (surprise, my medium frame didn’t fit him!), in the navy and christian (according to his Facebook page). He actually seems like a nice, decent guy. Almost right off the bat he suggests I take it for a quick spin which I do. We then chat and I ask him a bunch of questions he doesn’t have good answers for like, “what year is the bike?”, “what size frame is it?”, “did you build it yourself?” What I do learn is that he allegedly bought it off his buddy a couple months ago for $2k and that it doesn’t really fit him. He figures the bike is worth $5-$7k. 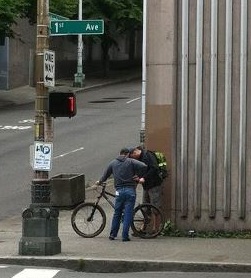 After stalling for as long as I could I check my phone again. Still no word from the cops. So I suggest another test ride, he agrees, I hop on, and never look back!

I duck down to Western and pedal furiously to Western and Lenora, call Chelsea and arrange a rendezvous at 1st and Virginia. I load the bike up and hop in drenched in sweat.

I’m actually surprised how long it took him to wonder where I went. So I text him. 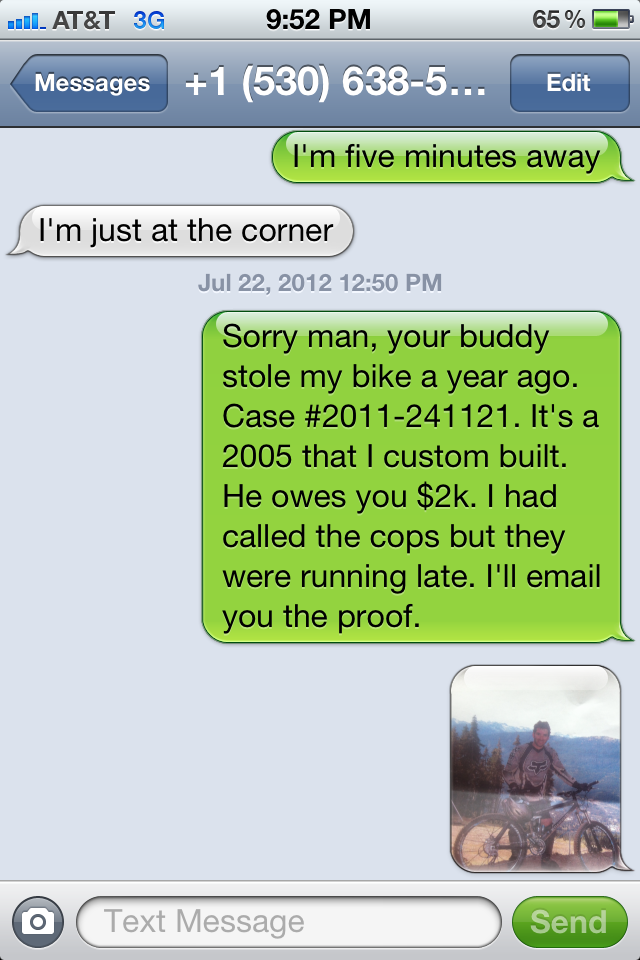 As we’re driving home the police call wondering where I am. I reply that I don’t need their help. “Did you get your bike back?” Yes. “How?” I just took it. “So you don’t need our help?” Nope.

As I’m hanging up the phone we drive by three cop cars dealing with a homeless man outside of the Cheesecake Factory. Thanks for the help SPD!

Now I didn’t want to steal my bike back and was feeling kinda bummed out about the whole thing when I got home. That is until my buddy called and wanted all the details. Then I was pumped. I had my bike back. Fucking badass!

(I know that the chances of recovering my downhill bike that was stolen at the same time are now totally zero :)).