On March 24, 25 and 26 I skied from Blackcomb to Whistler along the Spearhead Traverse!

The Spearhead is a 34 km traverse that starts from Blackcomb and ends on Whistler. It typically takes one to four days, though the record is an unbelievable 4 hours! We had intended to do it in four days but because of possible incoming weather we did it in three. And fortunately for us it was sunny every day and only started raining once we were having beers at the end of the trip :). 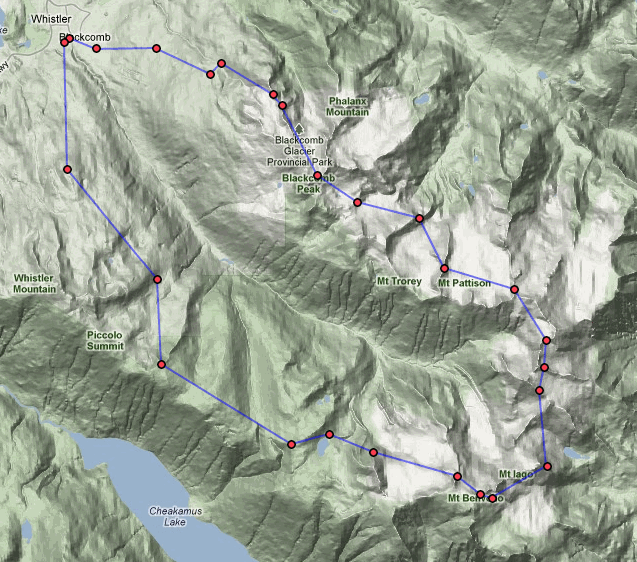 I first heard about the traverse last year while summiting Mount Baker and given all the time off I have this spring seemed like a great trip to do. Especially since it is cheaper to drive to Whistler than it is to fly to Zurich/Geneva to do the very well known European ski traverses like the Haute Route.

Being new to ski mountaineering and not having any friends game for taking time off to do it, I did the trip with Pro Guiding. Forest McBrian was our guide, Levi from the shop joined us as a tail gunner guide and the was one other client with us, Greg.

We were supposed to do it earlier in March but the trip got postponed due to bad weather. That didn’t stop me from heading up to Whistler for some resort skiing. While their I peaked my head over the top of Blackcomb and checked out the Spearhead Glacier and Decker and was blown away. I had no idea there was so much terrain surrounding Whistler Blackcomb. I couldn’t wait for the trip to start!

I drove up the day before and had a nice night eating wings at Earl’s and staying at the Listel (no outdoor hot tub though!).

We met at day lot 4 at 8 am where you can indeed park overnight for free (it was not clear you could and parking at hotel starts at $16/night.)

From there we “trekked” to guest services to get our backcountry pass which lets you get a ride up the mountain for about half the price of a regular lift ticket (you do need to show them your beacon, shovel, probe, skins and ID).

Then it was a ride up the Blackcomb Gondola to Excelerator chair which was a trick riding with a 45lbs pack! Then up Glacier Express chair, then up the Showcase T-bar. At the top of Showcase you then boot to the Blackcomb Glacier where you skin up to the East Col and the adventure really begins!

We skied and skied and skied. Seemed to be mostly uphill :). We crossed numerous glaciers. Saw incredible peaks and by the end I was thoroughly exhausted. Normally I’m not the slowest guy but with this group I was and it felt like I was really suffering. In hindsight I should have brought an extra liter of water and ate more. In terms of ski descents, there really wasn’t any. Most of the skiing we did was traversing or skiing in firm conditions. Sadly no real epic turns.

We setup camp on the Ripsaw Glacier where only one other group was camping. The Ripsaw Glacier is basically the furthest point out on the traverse so we had essentially completed half the trip in the first day.

While our guide Forest and Levi dug out a snowcave with tarp, Greg, the other client, and I setup my MSR Hoop tent and spent the night melting snow and reading my Kindle iPhone app. I did have a little mishap when my Nalgene bottle wasn’t screwed on tight and about 500 ml of water leaked out. I did my best to spoon out the water but my bag did get a little wet. I don’t know if it was the wettest or because I left my extra sleeping pad in the car, but I had a chilly night and didn’t get much sleep :(. 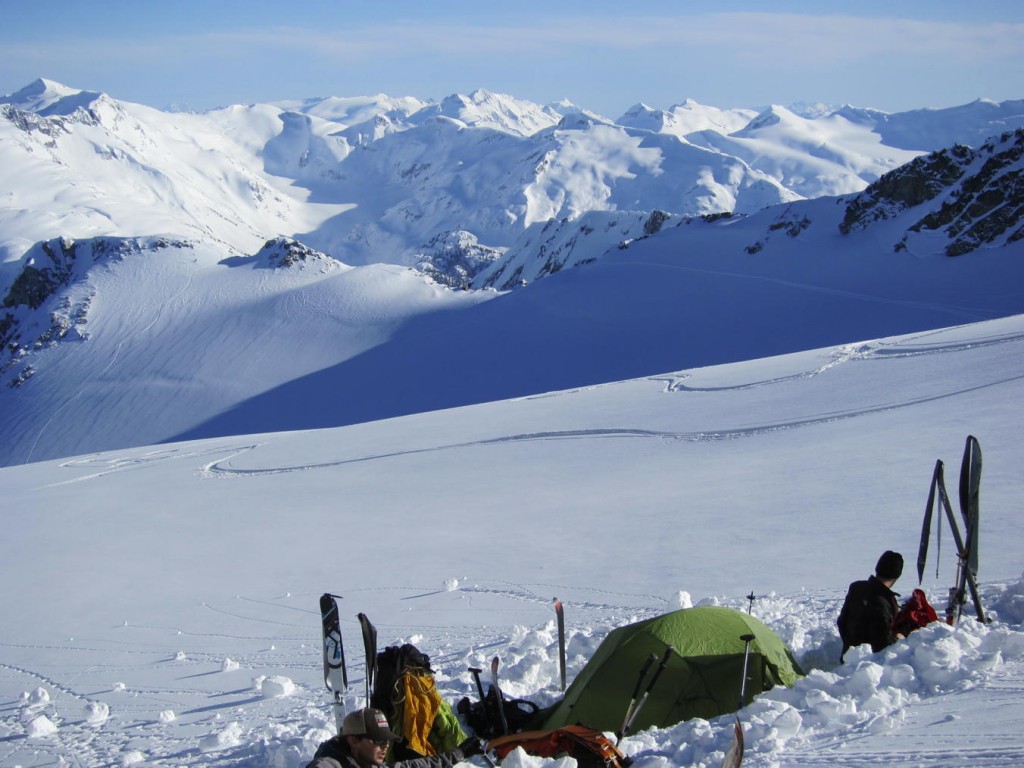 Forest gave us a very early wakeup call of 5 am with intended departure of 7 am which we more or less made. We then set off for the Himmelsbach Hut.

While we still skied a good amount uphill we did have a great ski descent down the Overlord Glacier.

At the hut we were pleased to discover that there was room for us. No camping! Plus park services had just dug out the outhouse for the first time that season and someone else had dug a hole in the lake so no boiling snow all night :).

Half of our group was tuckered out and called it a day. However, Forest and I weren’t and decided to tackle Fissile Mountain. 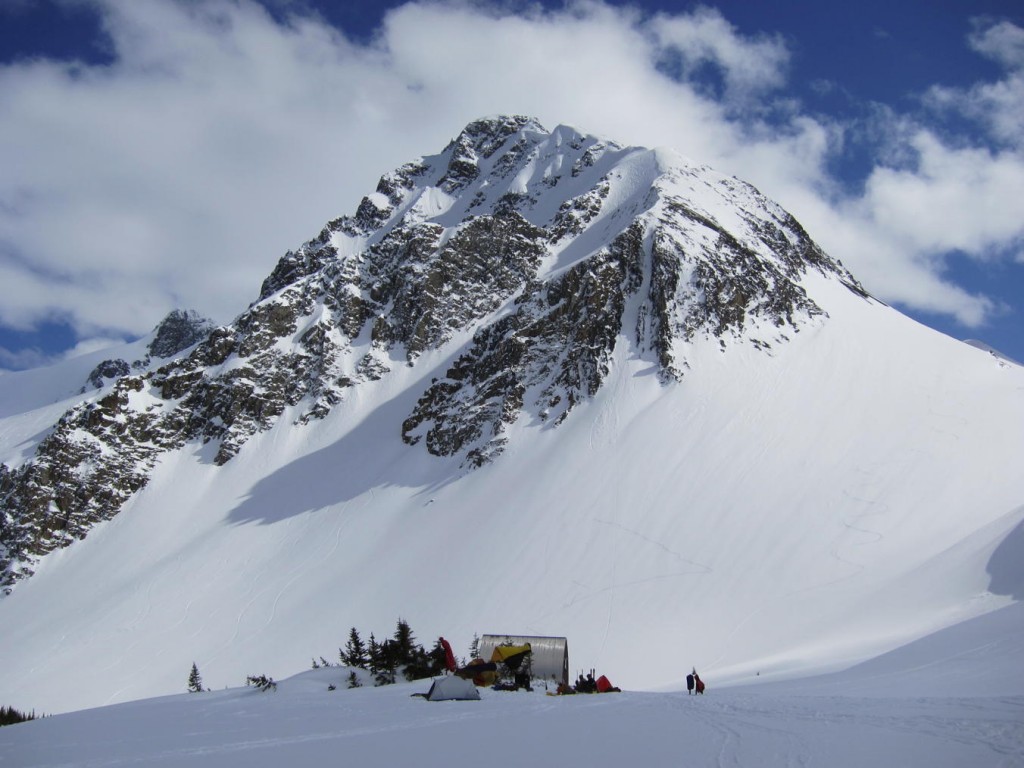 We approached from the south west, first skiing, then booting, then scrambling up loose scree for the last
couple hundred feet. 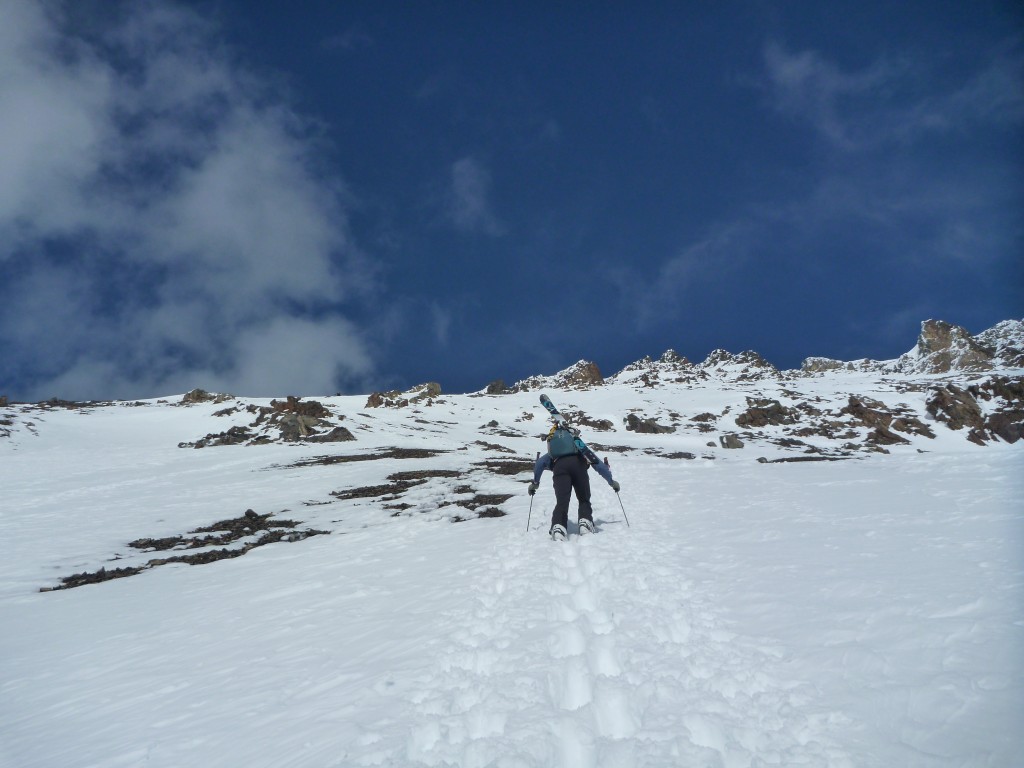 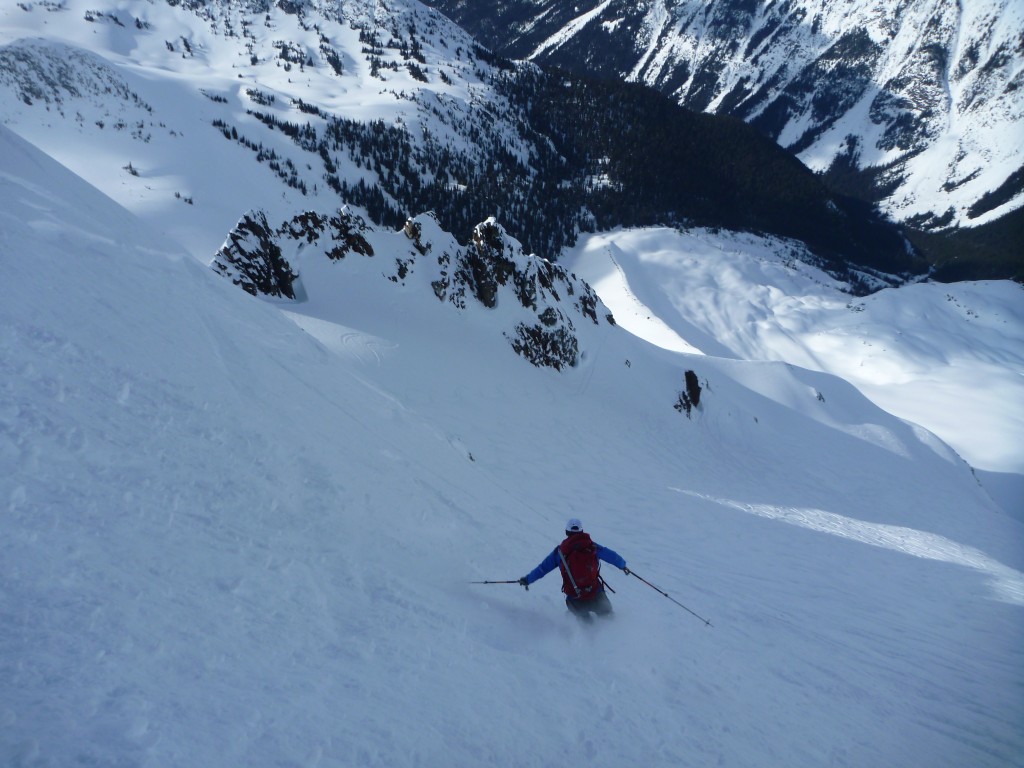 Back at the hut we hung out, made dinner, drank Jameson, heard about the proposed Spearhead Huts project and heard about how another group helped out with a helicopter rescue of someone who blew out their knee!

The guys warned me the hut was pretty basic. Which it is. But it definitely beat camping in the snow. I think we had about ten people in the hut that Sunday night. 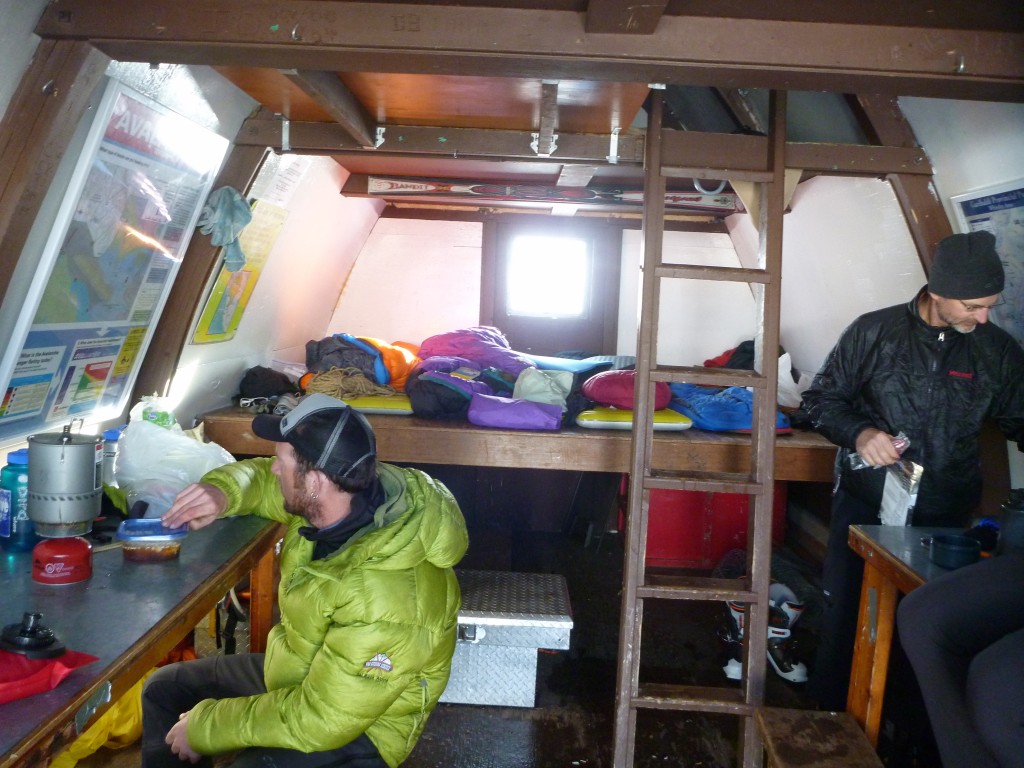 We had a leisurely departure. Wake up time mainly dictated by when it got loud in the hut.

We skied up the Singing Bumps instead of skiing out Singing Pass. Taking the bumps out takes you up to the summit of Flute back in the resort area. We then skied down to the Burnt Stew trail and took that over to the bottom of Emerald chair and then we simply skied down. Forest must have legs of steel since we did the 6000′ descent with basically no stops :).

Back in Whistler we dropped our gear at the car and hit the Brewhouse for wings, burgers and beers. So tasty!

Two full days of sun! And on the third day the clouds only started to roll in as we were well on our way to re-entering the ski area. During the days the temps seemed to range from 0’c to -10’c. At times I was wearing a t-shirt, and other times I was wearing every piece of clothing I had :). Though I did get by never wearing my long underwear bottoms or big ski gloves. Snow conditions ranged from bulletproof icy snow to boot top pow.

I’m so glad I did the traverse. Great way to see the backcountry for both Whistler and Blackcomb. However, after now doing my first big traverse I don’t know if I’m in love with traverses. I think I’m more of a find a cool line and go get it kinda guy.