As part of our Whistler Gran Fondo training this Saturday we drove two hours to Newhalem up Highway 20 to tackle Rainy Pass and Washington Pass. We road about 86 miles and supposedly almost 10,000 feet of vertical gain!? (I really want a Garmin Edge 500 to track my rides.) Overall, it was a great ride. Lots of scenery, 3-4 foot pretty clean shoulder almost the whole way, steady climbs with some downhill sections to give you relief on the way up (or discourage you…). FWIW, I thought this ride was easier than Chinook Pass and less scenic. Though Rob disagrees with both those statements. The morning started at Rob’s with pancakes: Though we couldn’t leave until we got Rob’s rack on my Cruiser which entailed some early morning metal sawing, “good morning neighbors”:

We started at the Newhalem campground and then headed North on Highway 20. Note that there are no services on Highway 20 except water at Colonial Creek campground 11 miles past Newhalem so bring lots of food and water! Three of us had three water bottles (one in our jersey pockets), but Donald was wise and had just bought a seat post water bottle holder that we were all jealous of.

We had originally planned on going to Mazama and back but with our late start and pace we would have been riding back in the dark :). So after first crossing Rainy Pass at 4855 feet and then reaching Washington Pass at 5477 feet we turned back. 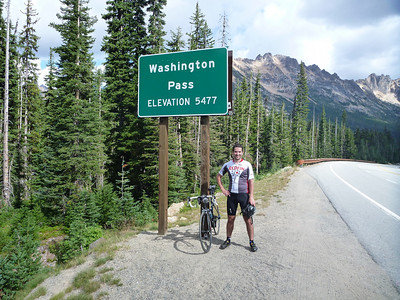 But not before trying to refill our water bottles at the info center at Washington Pass which oddly was closed!? The way back down started slow:

But quickly cranked up to 40+ mph. But the “severe side winds” put a real damper on things.

Note, there are two tunnels. Both fine up hill, but on the way down the second tunnel is some freaky shit at 40 mph. While pretty short you can’t see a thing so cross your fingers there is nothing on the road!

See all my photos.