Most of it was written before one of our guides, Kip Garre tragically passed away this spring.

Kip, thanks for showing us Alaska.

Before reading this go check out Brian Nevin’s photos of our trip. Brian’s a Redbull photographer that we lucked into riding with and captured better than words can, the awesomeness of the Chugach Mountains in Alaska.

A few years ago we got hooked on heli-skiing. At the time we vowed to go on one heli-ski adventure a year. Oddly, the next year, 2009, we didn’t carry through with our promise. For 2010 we hit up Silverton. For 2011, our third adventure, there was no question, it was time to go to Alaska, the home of extreme skiing powered by helicopters. In the lower-48 there are six operations. In Alaska there’s over 20.

So how was it?

Here’s a photo of me on top of Humble Pie, one of the taller peaks in the Chugach range. I was scared shitless! Notice I’m wearing a climbing harness. That’s in case I fell in a crevasse or bergschrund and needed to get pulled out. It was fucking awesome, even though it hadn’t snowed in six weeks. Wait? How is that possible!? :)

For starters, Alaska is just absolutely beautiful. Flying up from Seattle I was glued to the window watching the endless mountain ranges. Touching down in first Anchorage, then Cordova, it felt like we were in a black & white ski movie. Standing on top of one of the highest peaks in the Chugach on a blue bird day you could see forever. Flew from Seattle to Anchorage to Cordova. 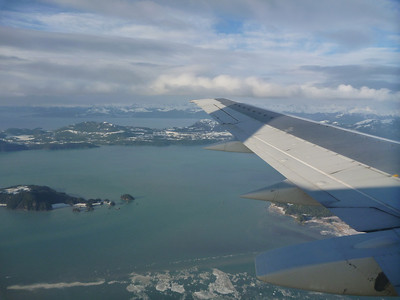 Hiked around the Sheridan Glacier. Cordova to Yuakata, to xyz, to Seattle. For those of you thinking about going heli skiing in Alaska and are considering Points North here’s all the details!

What could be bad about a week of clear skis? Well, if it is week six of no snowing and there was a major windstorm the week before you have some seriously dicey conditions.

I think it is safe to say that for everyone in our group these were the worst conditions we’d ever skied in. The conditions were “firm”, which was code for extremely hard packed and covered in sastrugi. For the most part you couldn’t see your tracks. There really was no snow for our skis to dig into it. Occasionally we found brief patches of breakable crust snow (dubbed creme brulee) that was skiable for five turns.

In terms of temps, one day someone in another group skied in her bikini. Another day our guide was wearing two large puffy jackets.

In terms of wind, sometimes we encountered some wind, sometimes not. We did have one day where they flew us out to the zone, we skied one run, and then they pulled the plug because it was too gusty for safe heli operation.

On why we picked Points North

The default option was to go with Silverton’s heli trip as that is what first lured us to Alaska. Our other option was Points North as JJ had a friend who had gone with them and recommended them.

Silverton appealed to us because we had ridden with Aaron and his guides before and loved it. They were also a little cheaper. However, their dates were likely to conflict with the Whistler Telus Festival.

Points North appealed to us because of their private heli option (which we didn’t end up doing) and potentially nicer lodging and better food.

We ended up picking Points North, primarily because of the cost of their private heli option. But once we had settled on them we then decided not to go the private route based on a few phone calls with them.

On private or not

Turns out that private really only makes sense if you are a group of crazy good skiers. Likely only pro skiers need to go the private option.

On when we decided to go

We tried to put some thought into when to go but ultimately I think it boiled down to when all our schedules aligned. In chatting with the guides it sounds like any week could be a good one (or a bad one). In chatting with someone who had been coming to PNH for nine or so years he said he favored their first four weeks. That said, one advantage of going later in the season is that the days are longer. While we were there they were gaining 7 minutes of daylight a day!

Kinda of reminded me of summer camp.

Hasn’t snowed in 6 weeks. Last week they had a major windstorm come through and it is very hard pack. If you have skinny/race skis you should definitely bring em since the forecast for this week has no snow in it. What made us feel better about getting 6 very hard pack runs in today was that the folks on week 1 and week 2 only got 2 days in each and it looks like we’ll be skiing all week unless another wind storm comes in. Our guide said that the skiing we did today was the best skiing he’s done in the last 2 weeks and I considered the conditions to be some of the worst I’ve skied in. That said, the mountains here are huge, the terrain is beautiful, helicopters are fun and the food is great!

– A few groups here are pulling out early. They skied Sunday, Monday and Tuesday and then are flying out today. So that’s an option for you guys if you want to plan ahead for that. We’re not going to. Yesterday they offered us the option of going to “the beach” instead of skiing. This is apparently a pretty rare excursion and I highly recommend it if you are offered it. We’re going to ski today and then maybe pay up for another day. Otherwise there’s the local ski hill or hiking around a glacier.
– AT&T has really spotty service here.
– The wifi is very slow and sometimes down for long stretches
– Bring warm clothes!
– We’ve been introduced to a dice game. If you like gambling, bring some one dollar bills.
– You don’t need to buy too much beer in Cordova as they’ve been providing a keg a day and we’ve been drinking a lot of that.
– You’ll have lots of time to hone your ping pong and foosball skills
– There’s a TV w/DVD player in the lounge if you want to bring movies
– It is really sunny on the mountains. Bring good googles.
– The guides are very optimistic and all smiles which helps keep us going in this no-powder situation.
– The food is great! You may want to pick up some light snacks but not really necessary.
– If you lose something skiing you owe the group a bottle of gin
– No one has gone swimming yet but there has been talk of it

One Response to Points North Heli Alaska – aka ManCamp