In my quest to ski as much as possible during my sabbatical I had signed up for a Pro Guiding Sahale Peak trip and convinced Shawn to join me. Unfortunately we couldn’t do Sahale since the road was closed (unless we wanted to skin 15 miles in; no thanks!) so our guide Dave tried to find us another adventure…

At the top of his list was a Shusksan attempt via the White Salmon.

While recovering from my previous attempt he called me up in a panic having seen Andre’s photos posted to Facebook moments before.

I assured him that we had not summited and I was still stoked to go out and get Shusksan.

So on Saturday morning I picked Shawn up at 6 am on Saturday April 14 and we headed off to the Mount Baker ski area.

Conditions were nice up until the ski area where we encountered rain in the parking lot :(. So we hung out for a bit waiting for everyone to arrive. Skiing with us were three other clients, Ma href=”http://www.proguiding.com/content/our-guides”>Dave Jordan our “regular” guide, Solveig Waterfall and her husband Seth Waterfall tagged along.

Doing Shuksan in two days, with our camp at 4500′ made for a leisurely day which is always nice! It also gave us lots of time to try our hand at building our first snow cave. 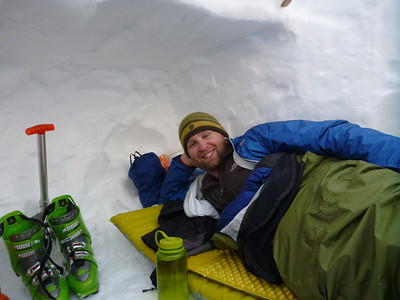 The snow cave did take us a long time to dig out. I’m sure we’ll get faster once we have the measurements down and have a little more experience with it :). Instead of doing a full snow cave, we covered our big hole in the side of the hill with an Integral Designs Sil Tarp. To protect our sleeping bags from the snow we used bivy sacks.

Once the snow cave was setup we hung out with the group, ate dinner, drank whiskey and chatted. With three guides, there was certainly lots of stories of epic adventures. It didn’t hurt that Seth had summited Everest twice :).

As is usual on these trips, once the sun started to head down we all headed to our respective tents and tucked in for the night. I don’t mind crashing early, just means some quality reading time (Kindle app on my iPhone).

Sleeping in the snow cave went pretty well! Though I probably should have borrowed Andre’s 15’f bag instead of his 30’f bag… I was a tad chilly with all my clothes on in it.

While making breakfast I was boiling some water I experienced my first Jetboil flare up. The thing turned into a flamethrower! Good thing we weren’t in a tent. Though it did cause the snow cave to fill up with water vapor. We couldn’t see a thing until Shawn made our fresh air opening a little bigger :).

Other than that, it was uneventful getting ready to depart.

Before leaving camp I checked the weather forecast which called for partly sunny and light winds. At around 8000′ Seth called a halt to things as crevasses were starting to open up and with visibility so shitty it was hard to see what was up. We tried to wait for the clouds to clear but after much sitting around it didn’t look like we were going to get the partly sunny conditions we needed, or even just not really fucking cloudy, in order to wind our way through the crevasse field. Sadly the call was made to head back down.

I was pretty bummed but what can you do?

Fortunately we did get some good skiing in. Here’s Seth ripping it up: Sadly as we were making our way down the skies did part. But we weren’t about to turn around. So frustrating!!

Though I’m sure had it been partly sunny as we were going up the Hanging Glacier I would have been totally freaked out :).

To save ourselves the grief of skinning up the clearcut from the toe of the glacier to the ski area we pushed a high traverse across. This worked much better.

After post-trip food and drinks at Chair 9 in Glacier, at which Seth convinced me Everest was totally doable, everyone headed back to the Seattle area while I pointed the Cruiser north to Whistler.